I have some exciting new wheels to tell you about (available as an 80×10mm black pair and an 80×10mm white pair). With a few small exceptions, all of the wheels we have made so far were for press fits (more properly called interference fit) onto 3mm D shafts such as those on our micro metal gearmotors. The press fit is simple and convenient for smaller motors and wheels, but there is an inherent trade-off between how hard you have to push to get the wheel on the shaft and how well the wheel stays on the shaft. As we contemplated designing some new wheels for our growing lines of 20D gearmotors and 25D gearmotors with 4mm output shafts (and higher power), I wanted something better. Our wheels already worked with our machined hubs with set screws, like this:

But the machined hubs are expensive, more expensive than the rest of the wheel. There’s also the much more minor issue of the machined hub option only allowing for the wheel to be placed at the very end of the shaft unless you drilled out the plastic wheel to have a hole larger than the shaft. I wanted to have an all-plastic, injection moldable solution that involved multiple parts that would somehow clamp the wheel onto an axle, kind of like a chuck on a drill.

My initial idea was to have just two parts: the outer wheel and an inner, interchangeable collet that would get wedged between the wheel and axle. But our mechanical engineers were not able to come up with a single part that could both compress onto the shaft and attach rigidly to the outer wheel. Because the parts are so small, the resolution of our 3D printer limited the effectiveness of prototypes, so we worked with scaled-up models. This picture shows one earlier model next to the final production parts for scale:

The other side of that model shows what we were thinking about for holding nuts in place on the back side of the wheel:

At that point, we were at a three-component design, plus the three screws and nuts, which was turning out to be difficult to assemble onto a shaft, even if it worked. The screw heads needed to be accessible from the outside of the wheel so they could be tightened, and that left the nuts near the motor where they were difficult to access, and trying to make the wheel hold the nuts required the wheel to be toward the motor and the collet piece on the outside, which was less aesthetically appealing.

So, in the end, we gave up on my all-plastic goal and designed a single stamped plate with threaded holes that clamps the wheel onto the collet insert. It definitely makes the assembly much easier, as you can see from this expanded view:

Having a design that seems like it might work on a 3D printed mock-up is still quite different from getting it working on the final, injection-molded parts. The clamping action of the collet inserts might have given us a little more margin for error than our usual press-fit wheels, but on those, a wrong fit is relatively straightforward to adjust: start with the fit a little on the loose side, and if it’s too loose, make the pin (and hole) smaller until it’s tight enough. With the new wheels, there were many more things that could go wrong, including alignment (wobbling). There was also the unknown of how much torque the hubs would take.

In the end, I think we arrived at a nice performance point. The wheels cannot take as much torque as if they were screwed on to the machined hub with set screw, but they can do much more than just the press fit hubs while putting less strain on the motor output shafts during installation. It’s possible to assemble the wheels with a little wobble, but if it’s a concern in your application, you can fiddle with how you tighten the three screws to get it as lined up as you like.

We started with our 80×10mm wheels, and made inserts that work with 3mm and 4mm shafts, both round and D-shaped:

Since the concept seems to be working, we will be working on different wheel sizes and inserts for larger shafts later this year.

As with all our new product introductions this year, we are having an introductory special. Be among the first 100 customers to use coupon code MULTIHUBINTRO (click to add the coupon code to your cart) and get 33% off on up to three sets. 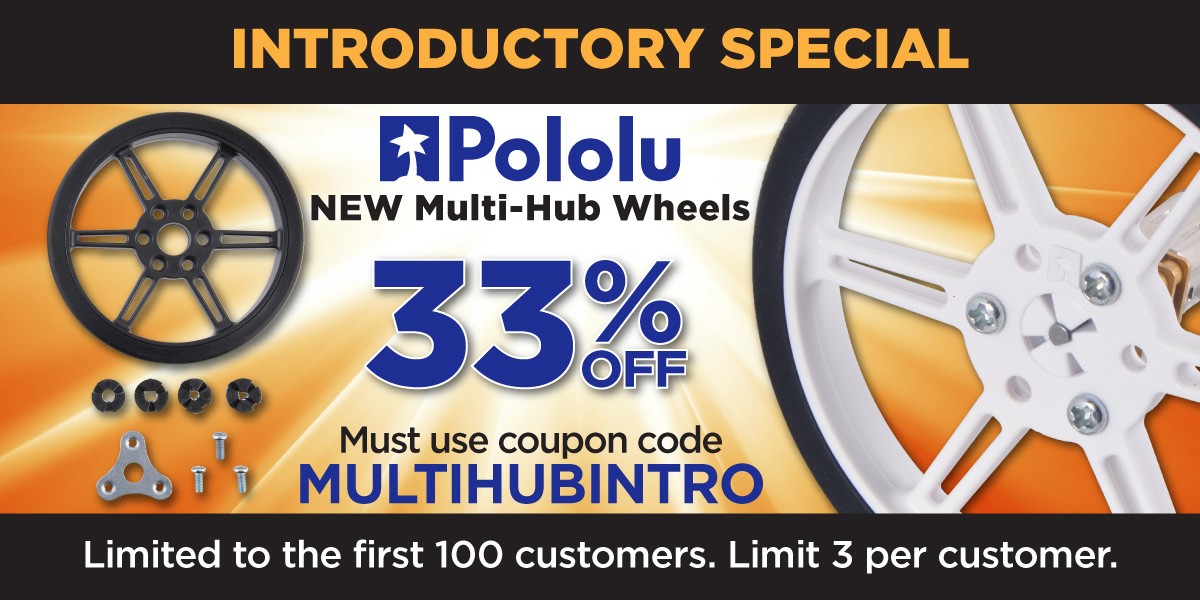