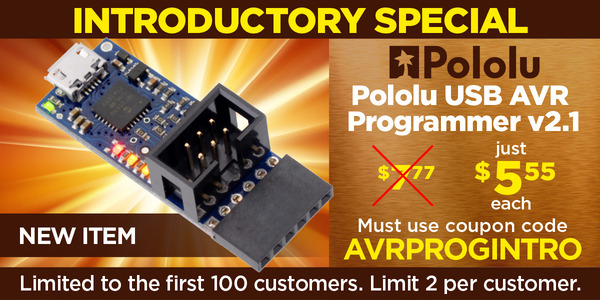 Our new programmer, the Pololu USB AVR Programmer v2.1, was supposed to be a minor update to our existing programmer, coming right after the A-Star 328PB Micro that we released last month, with the main point of excitement being the Las Vegas-inspired $7.77 price. But as we were testing the combination of the programmer with the A-Star, we were getting brown-out resets on the programmer when it powered the A-Star. The relevant part of the circuit was just a P-channel MOSFET that connected the programmer’s own logic voltage (which we call VDD) to the VCC pin of the ISP connector:

The problem was caused by the MOSFET turning on too well (quickly and with low resistance), causing the logic voltage on the programmer to drop if the VCC of the target device had more than a few µF of discharged capacitance on it. The bigger the capacitance on VCC, the bigger the voltage drop on VDD, until eventually the drop was big enough to trigger the brown-out reset protection on the programmer’s microcontroller. We tried various firmware tricks with our existing hardware, such as turning on the MOSFET for very short pulses to gradually charge up the target device’s VCC capacitance, but none of them worked reliably enough. So in the end, we decided to redo our PCB and put in a dedicated high-side power switch with a controlled slew rate. The new programmer can now power target boards with up to about 33 µF on their logic supplies.

These are the two other improvements we made to the new v2.1 programmer over the older v2 programmer:

The v2.1 programmer is otherwise identical to the v2 programmer, which means it’s a USB AVR microcontroller programmer that can program targets at 3.3 V and 5 V and offers an extra UART-type TTL serial port (like the popular FTDI USB-to-serial adapters) that can be super handy for debugging, bootloading, or even general connection of your project to a USB port.

The v2 programmer was already a good deal at under $12, but at $7.77, and with free shipping in the USA, we hope to make AVR development extremely accessible. The manufacturing improvements and other cost reduction initiatives I have been blogging about this year help us make this offer without losing money on it, but I am not expecting to be making money directly off of the programmers, either. My goal is to give you the best value in a basic tool you will use over and over as you build your own projects, with the hope that that will help you keep Pololu in mind the next time you need some electronics or robotics parts.

And, as usual for our new product releases this year, we’re offering an extra introductory discount: the first 100 customers to use coupon code AVRPROGINTRO get that already great $7.77 price dropped to $5.55 (limit 2 per customer). (Click to add the coupon code to your cart.)

Brian R.
23 Mar 2018
This comment is no longer visible to everyone because it was deleted.

Jan
23 Mar 2018
This comment is no longer visible to everyone because it was deleted.

Brian R.
23 Mar 2018
This comment is no longer visible to everyone because it was deleted.

Stephen
9 May 2018
This comment is no longer visible to everyone because it was deleted.

Jon
9 May 2018
This comment is no longer visible to everyone because it was deleted.