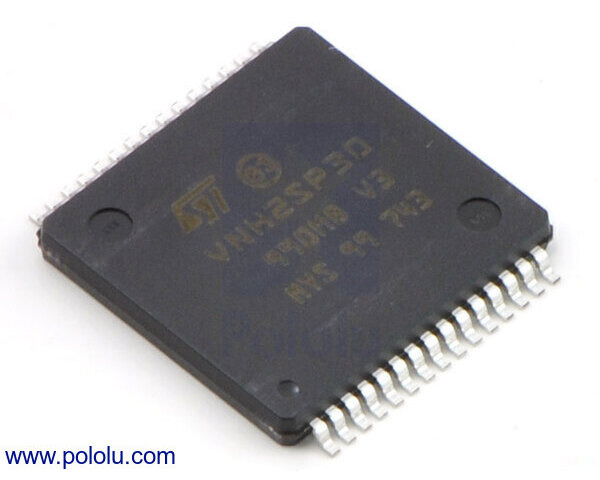 The VNH2SP30 is an improved version of the VNH3SP30 motor driver, featuring current sensing, increased drive capability, and a higher maximum PWM frequency of 20 kHz.

Note: This driver has been discontinued by ST. We recommend the newer and very similar VNH5019 as an alternative.

We use these motor drivers in several of our products, including the single and dual motor driver carrier boards, the jrk 12v12 motor controller w/feedback, the TReX motor controller, the qik 2s12v10, and the Orangutan X2 robot controller. We also carry boards based on the similar VNH5019. We offer the chips by themselves for more direct integration into your project or product.

Note: This motor driver IC comes in a MultiPowerSO-30 package that requires surface mounting; it is not a through-hole component. Our carrier boards give you convenient access to the VNH2SP30 and VNH3SP30 motor drivers without any surface-mount soldering.