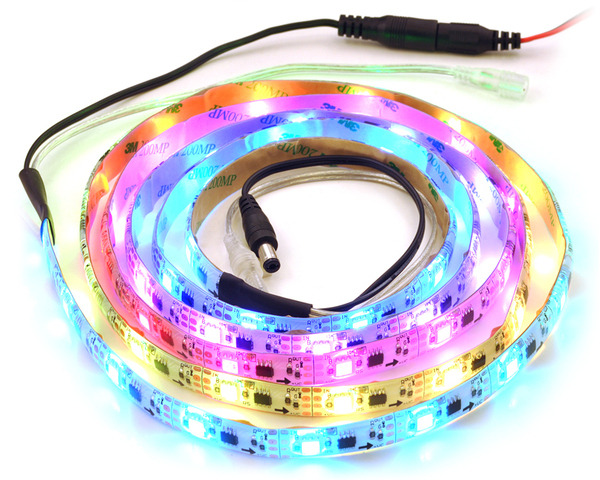 This 2-meter long strip contains 60 RGB LEDs that can be individually addressed using a one-wire interface, allowing you full control over the color of each RGB LED. The waterproof, adhesive-backed strip runs on 5 V and can be chained with additional high-speed TM1804 strips to form longer runs or cut apart between each LED for shorter segments.

Clearance: These strips are being replaced by similar, newer WS2812B-based strips.

Discontinuation notice: These high-speed TM1804-based LED strips have been replaced by similar, newer WS2812B-based strips. The new strips use almost the same control interface, so you can use the same code to control either of them and you can chain one type to the other. However, the two types of strips have different, incompatible connectors, and the order of the red and green channels in the protocol is swapped: the TM1804 colors are sent in red-green-blue order while the WS2812B colors are sent in green-red-blue order.

With the 1 m and 2 m LED strips, it is possible to use a single power supply to power several strips by chaining their power connectors together (as long as the power supply can handle the combined current draw of the strips). However, this can result in a significant voltage drop between the beginning and the end of a long chain of strips, which could cause the brightness of the LEDs to vary noticeably down the length of the chain.

Do not chain more than 5 meters of LEDs in a single DC circuit. It is fine to make longer chains with connected data lines, but you should power each five-meter section separately.

The default, idle state of the signal line is low. To update the LED colors, you need to transmit a series of high pulses on the signal line. Each high pulse encodes one bit: a short pulse (0.4 μs) represents a zero, while a long pulse (0.85 μs) represents a one. The time between consecutive rising edges should be 1.25–9.0 μs. After the bits are sent, the signal line should be held low for 24 μs to send a reset command, which makes the new color data take effect. Our tests indicate that the pulse widths do not have to be precise: there is a threshold around 0.6 microseconds that determines whether the pulse is a 0 or a 1, and a wide range of pulse widths on both sides of the threshold will work.

Each RGB LED is controlled by a driver IC that receives data on its data input line and passes data on to the next IC using its data output line. The high-speed protocol of the driver allows for fast updates; our library for the Arduino below takes about 1.1 ms to update 30 LEDs, so it is possible to update 15 meters of LED strips faster than 60 Hz. However, constant updates are not necessary; the LED strip can hold its state indefinitely as long as power remains connected.