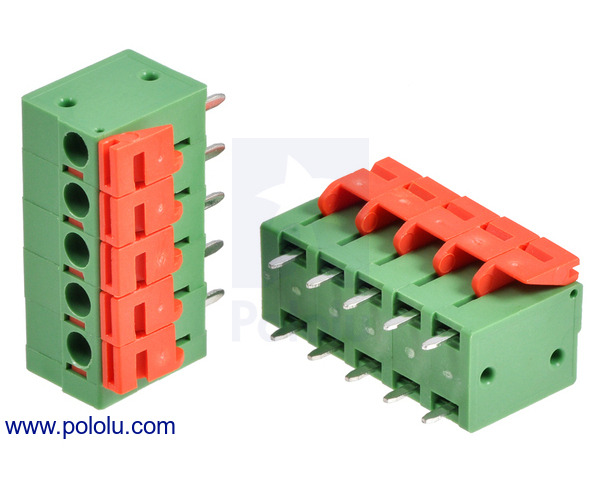 These top-entry screwless terminal blocks have a pitch of 0.2″ (5.08 mm). Each block has five spring terminals that automatically grip the stripped ends of inserted 22 – 16 AWG wires, allowing for easy, temporary connections to your PCB, and units can be combined to make longer blocks. They are rated for 300 V, 10 A (UL) and ship in packs of two.

These terminal blocks have spring terminals that automatically grip inserted wires and release when their levers are pressed with a fingernail or small object, enabling easy, temporary connections to a PCB. Various sizes are available in two orientations (side-entry and top-entry) and two pin spacings (0.1″ and 0.2″):

These terminal blocks can be combined to make longer ones, or segments can be removed to make them shorter. Each block has two pins per terminal, and they are intended for use with PCBs that have the appropriate footprints; they do not work well with solderless breadboards because the legs are too short.

This product is a two-pack of 0.2″-pitch, five-pin, top-entry terminal blocks. The more general dimension diagram for an XX-pin version of this screwless terminal block is shown below:

It is possible to reconfigure these terminal blocks by combining them to make larger ones or to removing segments to make them shorter. To combine two terminal blocks, you must first pry off the end cap from one. With the end cap removed, there is nothing to hold the last lever in place, so be careful not to lose it!

Once the end cap is removed, you can line up the newly exposed prongs with the holes on the side of another terminal block and press them together. The following two pictures show combining two 6-pin side-entry screwless terminal blocks into a single 12-pin block:

We carry several different sizes and styles of terminal blocks in addition to these screwless terminal blocks; the picture below shows a side-by-side comparison:

Alternatives available with variations in these parameter(s): pins Select variant…