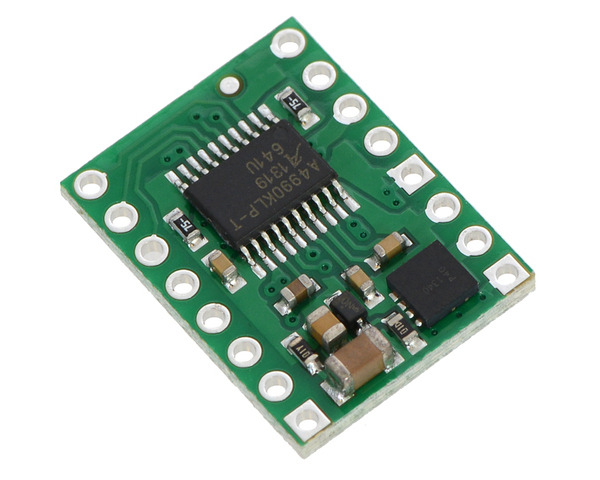 This compact breakout board makes it easy to use Allegro’s A4990 dual motor driver, which can control two bidirectional DC motors over a wide operating voltage range of 6 V to 32 V. It is capable of delivering a continuous 0.7 A to each motor channel, and onboard sense resistors enable the A4990 to limit the peak motor current to about 0.9 A per channel. The driver also features protection against reverse-voltage, under-voltage, over-voltage, over-current, and over-temperature.

Allegro’s A4990 is a dual H-bridge motor driver IC that can be used for bidirectional control of two brushed DC motors at 6 V to 32 V. It can supply up to 0.7 A continuously to each motor channel, and the current control feature of the A4990 limits the peak motor current to about 0.9 A per channel with the onboard sense resistors, making this a good choice for small, low-current motors that run on relatively high voltages. Since this board is a carrier for the A4990, we recommend careful reading of the A4990 datasheet (301k pdf). The board ships populated with all of its SMD components, including the A4990 and an additional FET for reverse battery protection.

For a single-channel driver with a DIR/PWM interface and a similar operating voltage range, please consider our DRV8801 carrier. For lower-voltage alternatives to the A4990, consider our DRV8833 and DRV8835 dual motor driver carriers.

We also carry an A4990 dual motor driver Arduino shield that makes it easy to incorporate this great driver into an Arduino project.

1 Over-voltage protection typically kicks in at 34 V, but it can trigger at voltages as low as 32 V.

2 While the A4990 can tolerate input voltages as high as 50 V, the reverse-voltage protection MOSFET is only rated for 40 V.

The OUT1 and OUT2 pins form one motor channel while the OUT3 and OUT4 pins form the other. The state of each output is controlled by a corresponding input (IN1 through IN4); note that IN2 and IN4 are inverted inputs. All four INx pins are pulled to their inactive states by default. See the truth tables in the A4990 datasheet for more information on how the inputs affect the driver outputs.

The EF1 and EF2 pins are open-drain outputs that are driven low by the chip to indicate active faults (the datasheet describes what each combination of EF1 and EF2 means). Otherwise, these pins remain in a floating state, so you will need to connect external pull-up resistors (or use microcontroller inputs with their built-in pull-ups enabled) if you want to monitor fault conditions on the driver.

The A4990 can actively limit the current through the motors by using a fixed-frequency PWM current regulation (current chopping). This carrier board connects 0.075 Ω resistors to the current sense pins, which sets the current limit to a nominal 1 A per channel. In our tests, the board actually limited the motor current to slightly above 0.9 A.

Even though the driver limits the motor current to about 0.9 A per channel, the chip by itself will overheat at lower currents. For example, in our tests at room temperature with no forced air flow, the chip was able to deliver 0.9 A per channel for approximately 20 s before the chip’s thermal protection kicked in. A continuous current of 0.7 A per channel was sustainable for many minutes without triggering a thermal shutdown. The actual current you can deliver will depend on how well you can keep the motor driver cool. The carrier’s printed circuit board is designed to draw heat out of the motor driver chip, but performance can be improved by adding a heat sink. Our tests were conducted at 100% duty cycle; PWMing the inputs will introduce additional heating proportional to the frequency (unless the A4990 is already PWMing the outputs to limit the current).

Two 1×8-pin breakaway 0.1″ male headers are included with the A4990 motor driver carrier, which can be soldered in to use the driver with perfboards, breadboards, or 0.1″ female connectors. (The headers might ship as a single 1×16 piece that can be broken in half.) When used with these header pins, the board can be oriented with the parts visible, as shown in the right picture above, or with the silkscreen visible, by soldering the headers in from the opposite side. You can also solder your motor leads and other connections directly to the board.

This schematic is also available as a downloadable pdf (118k pdf).