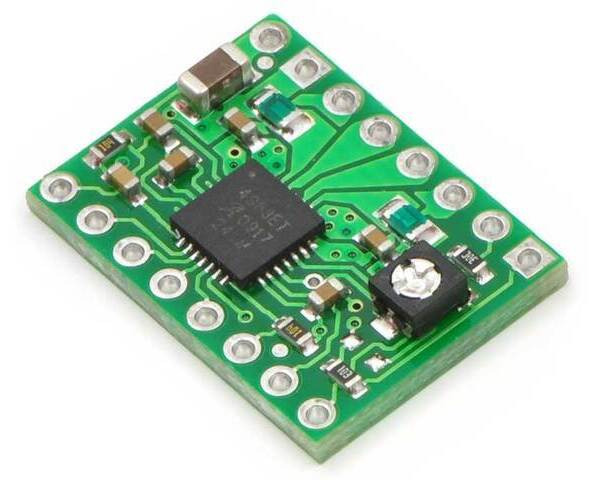 The A4983 stepper motor driver carrier is a breakout board for Allegro’s easy-to-use A4983 microstepping bipolar stepper motor driver. The driver features adjustable current limiting and five different microstep resolutions. It operates from 8 – 35 V and can deliver up to 2 A per coil.

I want to control a 3.9 V, 600 mA bipolar stepper motor like this, but your A4988 stepper motor driver carrier has a minimum operating voltage of 8 V. Can I use this driver without damaging the stepper motor?

If you do want to use a lower motor supply voltage (under 8 V) for other reasons, consider using our DRV8834 low-voltage stepper motor driver carrier.

My A4988 stepper motor driver is overheating, but my power supply shows it’s drawing significantly less than 1 A per coil. What gives?

Measuring the current draw at the power supply does not necessarily provide an accurate measure of the coil current. Since the input voltage to the driver can be significantly higher than the coil voltage, the measured current on the power supply can be quite a bit lower than the coil current (the driver and coil basically act like a switching step-down power supply). Also, if the supply voltage is very high compared to what the motor needs to achieve the set current, the duty cycle will be very low, which also leads to significant differences between average and RMS currents: RMS current is what is relevant for power dissipation in the chip but many power supplies won’t show that. You should base your assessment of the coil current on the set current limit or by measuring the actual coil currents.

Please note that while the A4988 driver IC is capable of supplying 2 A per coil, the chip by itself will overheat at lower currents. The carrier board PCB helps draw heat away from the IC, but we have found that it generally requires a heat sink to deliver more than approximately 1 A per coil (the Black Edition A4988 carrier has a four-layer PCB that lets it deliver up to around 1.2 A per coil without a heat sink), but this number depends on factors such as ambient temperature and air flow. For example, sealing three A4988 driver carriers in close proximity in a small box will cause them to overheat at lower currents than a unit by itself in open air.

The above diagram shows a standard bipolar stepper motor. To control this with the A4988, connect stepper leads A and C to board outputs 1A and 1B, respectively, and stepper leads B and D to board outputs 2A and 2B, respectively. Note that if you happen to swap which way the wires are connected for any coil, the stepper motor will turn in the opposite direction, and if you happen to pair up wires from different coils, the motor should be noticeably erratic when you try to step it, if it even moves at all. See the A4988 datasheet for more information.

If you have a six-lead unipolar stepper motor as shown in the diagram below:

you can connect it to the A4988 as a bipolar stepper motor by making the bipolar connections described in the section above and leaving stepper leads A’ and B’ disconnected. These leads are center taps to the two coils and are not used for bipolar operation.

If you have an eight-lead unipolar stepper motor as shown in the diagram below:

you have several connection options. An eight-lead unipolar stepper motor has two coils per phase, and it gives you access to all of the coil leads (in a six-lead unipolar motor, lead A’ is internally connected to C’ and lead B’ is internally connected to D’). When operating this as a bipolar stepper, you have the option of using the two coils for each phase in parallel or in series. When using them in parallel, you decrease coil inductance, which can lead to increased performance if you have the ability to deliver more current. However, since the A4988 actively limits the output current per phase, you will only get half the phase current flowing through each of the two parallel coils. When using them in series, it’s like having a single coil per phase (like in four-lead bipolar steppers or six-lead unipolar steppers used as bipolar steppers). We recommend you use a series connection.