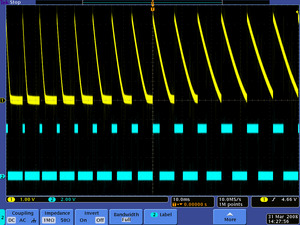 This application note explains how both types of sensors work and what their output signals look like.

Our older (first-generation) QTR sensors, introduced prior to August 2018, mostly have red and green PCBs. These sensor boards do not have integrated LED drivers, so their emitter brightness depends on the supply voltage.

Our newer (second-generation) QTR and QTRX sensors have black PCBs and feature integrated LED drivers that provide brightness control independent of the supply voltage and optional dimming to any of 32 possible brightness settings. They are available in a wide range of sizes and in High-Density (4 mm pitch) and Medium-Density (8 mm pitch) versions; HD arrays with five or more sensors additionally provide separate control of the odd-numbered and even-numbered LEDs for greater versatility.

The information about sensor output types in Section 2 and Section 3 applies to both the first- and second-generation sensor boards. Section 4 explains details specific to the second-generation QTR/QTRX sensors.

Each RC-type output is tied to a capacitor discharge circuit as shown below. Different QTR sensor products have different component values, and exact schematics for each QTR sensor can be found on its product page.

To use the sensor, you must first charge the output node by applying a voltage to the OUT pin. You can then read the reflectance by withdrawing that externally applied voltage on the OUT pin and timing how long it takes the output voltage to decay due to the integrated phototransistor. Shorter decay time is an indication of greater reflection. This measurement approach has several advantages, especially when multiple units are used:

When you have a microcontroller’s digital I/O connected to a sensor output, the typical sequence for reading that sensor is:

Please note that these data are affected by the specifics of the test. Reflectances depend on the surfaces, and each microcontroller will have its own trip-low threshold. In our specific example, you can see that at a height of 1/8″ above our surface, white results in a high pulse width of 120 μs and black results in a high pulse width of 2.6 ms. As the pulse width varies between 120 μs and 2.6 ms, you can tell that you are approaching or leaving the line.

The screen captures below show the results of the same test conducted at a sensor height of 3/8″.

Note that at the start of each yellow pulse, there is a 10 μs period where our microcontroller is driving the sensor output line high.

Lastly, the following screen capture shows an example of what the sensor output might look like as it sweeps across a black line on a white surface. A motor was used to rotate a white paper disk with a piece of black electrical tape on it in front of the sensor. The electrical noise present in the screen capture is from this motor. If you will be using these sensors in electrically noisy environments (e.g. around motors), you should filter the signal either with a low-pass filter circuit or in your microcontroller software. For example, when timing the high (blue) pulse, wait until the signal stays low for a minimum duration (e.g. 10 μs) before accepting the low signal as the end of the pulse.

To demonstrate what the A-type sensor output looks like as it passes from a reflective surface to a non-reflective surface and back again, we set up a motor to spin a white paper circle with a piece of black electrical tape on it as shown below.

The following three oscilloscope screen captures show the output of the QTR-1A reflectance sensor during the period where the black line passes by the sensor. The oscilloscope is set to 500 mV per division. The only difference between the three captures is the distance from the sensor to the disk: ~1/8″ in the first capture, ~1/4″ in the second capture, and ~3/8″ in the third capture.

Note that in these captures you can clearly see the effect of the motor’s noise on the output signal. This underscores the importance of filtering your sensor output if it will be in a potentially noisy environment, either by using a low-pass filter circuit or by averaging several sensor readings together.

Two different sensor options are available on our second-generation reflectance sensor arrays, denoted by “QTR” or “QTRX” in the product name. The QTR versions feature lower-cost sensor modules without lenses while the QTRX versions feature higher-performance sensor modules with lenses, which allow similar performance at a much lower IR LED current. You can see the two different sensor styles in the pictures below of the 4-channel modules:

A disadvantage of the QTRX sensor modules is that they leak light out the sides and can interfere with each other when they are closely spaced (unless barriers are added between the sensors). Consequently, the maximum emitter current on QTRX arrays is set low enough to limit the interference while optimizing their useful range. This is not an issue with a single sensor, so we offer high-brightness QTRXL versions of the 1-channel boards in addition to the normal-brightness QTRX versions, but it is still important to consider interference when using multiple 1-channel boards.

This video (taken with an old camera that does not have as much IR filtering as most newer cameras) shows the IR light leakage around the side of the QTRX sensor module:

The second-generation reflectance sensor arrays maintain a constant current through their IR emitters, keeping the emitters’ brightness constant, independent of the supply voltage (2.9 V to 5.5 V). The emitters can be controlled with the board’s CTRL pins, and the details of the control depends on the array size and density:

Driving a CTRL pin low for at least 1 ms turns off the associated emitter LEDs, while driving it high (or allowing the board to pull it high) turns on the emitters with the board’s default (full) current, which is 30 mA for QTR and QTRXL boards and 3.5 mA for QTRX boards. For more advanced use, the CTRL pin can be pulsed low to cycle the associated emitters through 32 dimming levels.

To send a pulse, you should drive the CTRL pin low for at least 0.5 μs (but no more than 300 μs), then high for at least 0.5 μs; (it should remain high after the last pulse). Each pulse causes the driver to advance to the next dimming level, wrapping around to 100% after the lowest-current level. Each dimming level corresponds to a 3.33% reduction in current, except for the last three levels, which represent a 1.67% reduction, as shown in the table below. Note that turning the LEDs off with a >1 ms pulse and then back on resets them to full current.

For example, to reduce the emitter current to 50%, you would apply 15 low pulses to the CTRL pin and then keep it high after the last pulse.

More information about the Pololu QTR sensors can be found in these resources: