I am excited to announce the release of the Tic T249 USB Multi-Interface Stepper Motor Controller, the fourth model in our line of Tic Stepper Motor Controllers. The Tic T249, which is based on the TB67S249FTG IC from Toshiba, features a broad 10 V to 47 V operating range and can deliver up to approximately 1.8 A per phase without a heat sink or forced air flow, making it our highest-power Tic yet. In addition to the array of high-level features offered by the other members of our Tic family, the Tic T249 offers access to several innovative features of the TB67S249FTG driver.

One of the most exciting new features is Toshiba’s Active Gain Control (AGC), which automatically reduces the stepper motor current below the set limit based on the actual load on the motor, allowing for reduced unnecessary heat generation and higher peak power when the motor actually needs it. The driver also incorporates Toshiba’s Advanced Dynamic Mixed Decay (ADMD) technology, which dynamically switches between slow and fast decay modes based on the actual motor current, providing higher efficiency and smoother steps at high speed than you get with traditional timing-based mixed decay.

The AGC has several configuration options, and our Tic Control Center software makes it easy to configure over USB:

Like the other members of the Tic family, the T249 makes basic speed or position control of a stepper motor easy, with lots of configurable parameters (e.g. max speed and acceleration) and support for six high-level control interfaces:

This video gives a brief demonstration of these interfaces in action:

The Tic T249 is available with connectors soldered in or without connectors soldered in. If you do not need the high-level interfaces provided by the Tic and want to control Toshiba’s stepper driver directly, we also offer stepper motor driver carriers for the TB67S249FTG and TB67S279FTG.

Here is a handy comparison chart with all four Tic stepper motor controllers:

The Tic T249 also has updated firmware (version 1.06) that includes several new features (which are available to the rest of the Tic family as well).

By popular demand, this new firmware adds support for limit switches: any of the Tic control pins (SCL, SDA, TX, RX, or RC) can be configured as a digital input for a forward or reverse limit switch. When the limit switch is active, the Tic abruptly shuts down any movement in the specified direction, but allows the motor to move in the other direction. You can use limit switches to help prevent your system from leaving its desired range of motion.

You can also use the homing feature automatically, without sending a command. If automatic homing is enabled, the Tic performs the homing procedure whenever it is being commanded to go to a specific position but it is uncertain of its current position (e.g. immediately after motor power is applied). This feature is intended to be used in the “RC position”, “Analog position”, and “Encoder position” control modes.

The new firmware also adds several features to the Tic’s TTL serial interface that make it more usable in systems with large numbers of Tics and in half-duplex serial buses. Specifically, it adds support for an alternative device number so any Tic can optionally be addressed by two different device numbers. It adds an option to enable 14-bit device numbers so you can have more than 128 Tics on a serial bus. The Tic now has an option to encode its serial responses using only bytes between 0 and 0x7F, which can be useful in setups where the serial response from one Tic will be seen by other Tic devices, and you don’t want it to be misinterpreted as a command. We also implemented several changes to make the Tic less susceptible to noise on the serial lines, and you can now enable CRC bytes for serial responses sent by the Tic so that you can confirm the data you received matches what the Tic sent.

As usual, we are offering an extra introductory special discount on the Tic T249, to help share in our celebration of releasing a new product. The first hundred customers to use coupon code T249INTRO can get up to three units for just $19.95! And we’ll even cover the shipping in the US! 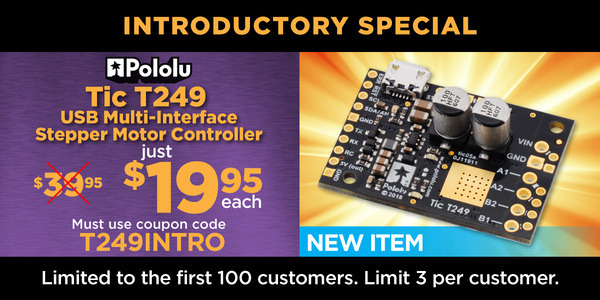