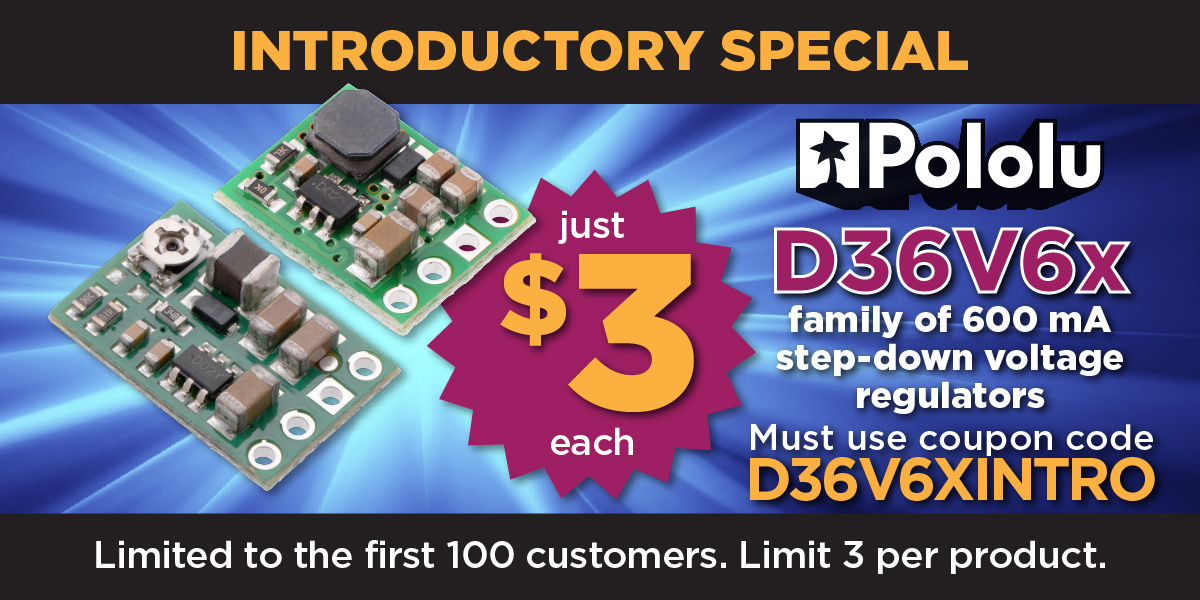 Wrapping up our new product releases for the month and for the summer is our new D36V6x family of step-down voltage regulators. These small regulator modules support a large input voltage range and are a great alternative to old three-terminal linear voltage regulators that waste a lot of power and get really hot. These new regulators can take an input voltage anywhere from a few tenths of a volt over the set output voltage up through an absolute max of 50 V, and they can deliver up to 600 mA. We have them available in seven fixed voltage options and two adjustable versions:

You might notice that the board for the adjustable version shows a 2010 copyright year (the fixed version is an even smaller board, and we did not fit the year on there). That’s because these new regulators are actually old designs updated with new regulator chips that use the same package and pinout. The older products were our D24V3x and D24V6x families of regulators, which were based on the Texas Instruments LMR14203 and LMR14206 ICs. For the new D36V6x family, we are moving up to the newer LMR16006 regulator. This chip has several exciting new features that we think will make it our favorite general-purpose regulator for many of our products: higher maximum voltage, better low-dropout performance, and better quiescent current.

The LMR16006 has a 60 V maximum input voltage, up from the 42 V of the LMR1420x parts. Even 42 V covered most of our typical applications, but it’s not quite enough for 36V nominal applications, which are getting more common. Our more advanced, integrated products such as motor controllers are often limited by some complex part or circuit, such as a motor driver, and we would like the overall operating range of the product not to be reduced by the regulator. Many stepper motor drivers, such as TI’s DRV8825 or the Toshiba TB67S249FTG and TB67S279FTG that we released carriers for in June, support maximum input voltages of 45 or 50 volts. It’s nice not to be limited by your regulator when you are making systems with those kinds of parts.

For our new D36V6x modules, we are limited to the 50 V maximum of the capacitors from Vin to ground. Unfortunately, capacitor options get a lot more restricted (and expensive) once we go beyond 50 V, so we decided to stick with our old boards so that we could continue to offer these regulator modules at a low price while still providing some substantial improvements. We might still make a new board with higher-voltage capacitors for those who would like to make full use of the regulator’s 60 V maximum. (For anyone thinking of just removing the caps and putting on your own external ones, you might also want to change the diode, which is also a 60 V part.)

Having a higher maximum input voltage is nice, but often we’re trying to squeeze the most we can out of a dying battery, so it’s nice to have a low dropout, which is the voltage the regulator needs between the input and output. The older LMR1420x parts had an annoying quality of the dropout voltage going up as the load current went down. The newer LMR16006 has a nice, low dropout as the current goes down, so if you don’t need much current, you can get 5 V out with just 5.2 or 5.3 volts in. Here is a comparison of the dropout performance of the old and new regulators:

Even when we put a new chip onto an old circuit board as I have described, we still test and characterize with different parts to get a good overall result. In the case of these regulators, where the circuit is quite simple, this phase of development is much more time consuming than laying out a circuit board. We build and test dozens of prototypes with different inductances, and even though you can’t see it in the pictures, we build the different voltage versions of the regulators with different inductors to get the best performance we can (within a given inductor type and size).

So how about getting a few to have around for general-purpose use on your next project? You can get one for just $3 as part of our introductory promotion using coupon code D36V6XINTRO, limited to the first 100 customers and to three per item (so you could get up to 27 regulators at that price if you get three of each voltage version). It’s always difficult for us to predict which versions will be how popular, so initial stock is limited, but we make these here in Las Vegas, so even if the version you want goes out of stock, you can backorder it with the promotional price, and we should be able to ship within a day or two.