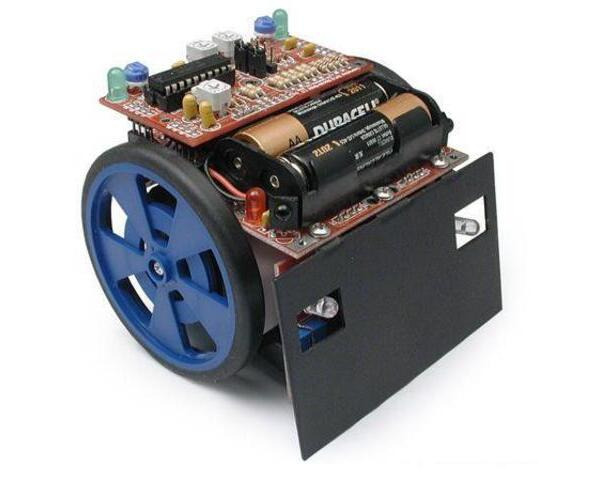 If you have been thinking about getting your own mini sumo robot but were waiting for the right kit to come along, we might just have the one for you! No programming is necessary to get the Sumovore going: it has a sumo wrestling mode and a line following mode, and assembly is easy with the step-by-step instructions written just for beginners. This robot outperforms many other robots, even in its standard configuration, and there are options to expand on its basic capabilities.

Compare all products in Robot Kits with Soldering or

The Solarbotics Sumovore is a great entry-level kit that can serve as an exciting introduction to the world of mini robot sumo and robotics. The Sumovore is mainly designed for mini sumo competitions, but it also includes a bonus line following mode so you can enter it in line-following contests, too. No programming is necessary because the Sumovore doesn’t use a microcontroller. Instead, it uses a discrete "brainboard" made up of analog circuits to control it’s motions. However, if you want the ability to program your bot, upgrading to a microcontroller brain is possible (see Expansion Capabilities).

Assembling the brainboard and the rest of the robot is explained in the instructions (2MB pdf), which include many detailed pictures to step beginners through every component in the robot. Assembly takes a few hours, and basic electronics tools, such as a soldering iron, wire strippers, diagonal cutters, long-nose pliers, and small screwdrivers are required (see page 4 of the instructions (2MB pdf) for a full list of the required tools). Don’t worry if you don’t have any soldering experience: the instructions begin with a soldering tutorial explaining what you need to know to get your robot up and fighting. (If you insist on practicing your soldering on something else, first, you might consider the learn to solder kit.)

The Sumovore sumo robot features two obstacle-detecting sensors on its front (for detecting your opponent) and four reflectance sensors on its bottom (for sensing the edges of the ring, and for line following). The GM8 gearmotors give the robot more speed than competing products that use modified-RC-servos, and the robot has outperformed other stock mini-sumo robots including programmable robots.

Note: The Solarbotics Sumovore robot is a kit that requires soldering; before using it, you will need to assemble the robot. Six AA batteries are required but not included. Wheel and front scoop colors may vary from the picture shown.