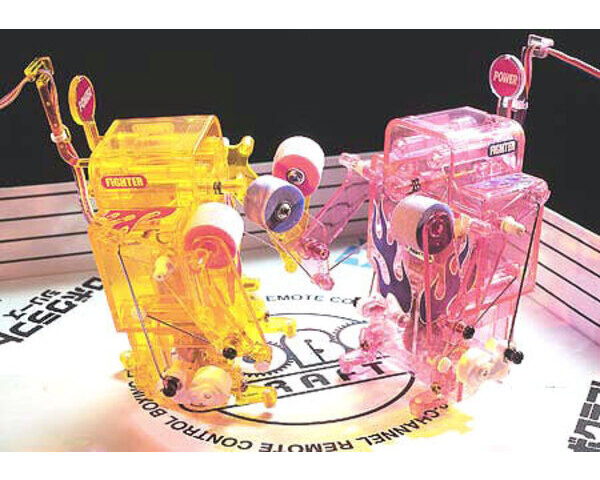 This set contains two Boxing Fighters, each with its own 2-channel remote control. Compete with a friend for the title of boxing fighter champion! Assembly of this robot kit is easy and educational.

Each Boxing Fighter is driven by two independent gearboxes. Each gearbox transfers movement to both its associated foot and arm via crank plate and linkage rod, causing the arm to punch as the foot propels the unit. Each gearbox is controlled by a corresponding lever on the two-channel remote control, which means you can move your fighter forwards or backwards while turning to the left or the right. In no time you will be able to make your boxing fighter go anywhere you want.

Through a simple adjustment of the elbow linkage rod, the type of punch can be changed from an upper cut to a straight jab. By adjusting one arm for upper cuts and one for straight jabs, you can achieve a combination of the two attacks for more tactical fights. You can also adjust the stability of each fighter, making it easier or harder for your fighter to be knocked down. If the fighter gets hit in his mouth, his judging plate drops to indicate that he has lost the match.

The fighters’ bodies are made from transparent yellow and pink ABS resin that allows you to see all of the motors, gears, cranks, and linkage rods in action.

Basic specifications (for one Boxing Fighter)

Hitting your opponent in the mouth will make the judging plate lower. When your opponent’s plate is completely lowered, you win the fight. Check out the Tamiya 71110 Boxing Fighter for more ways to play. This set comes with stickers that let you customize the appearance of your fighter, and the product’s box has been specifically designed as a boxing ring.

Note: This is a kit containing one yellow and one pink fighter (the blue fighter shown in some pictures on this page is sold separately as a single unit). Assembly requires using a screwdriver and snapping parts together. No soldering is required. Run on flat, smooth surfaces; avoid running over slopes, on bumpy roads, or on thick carpet.