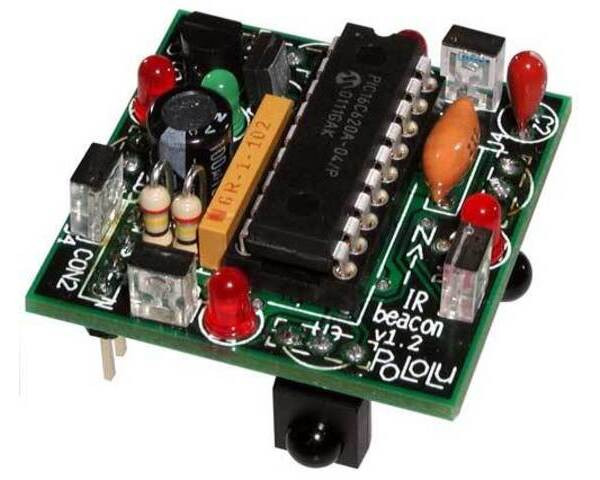 This item has been replaced by a new version. This page is left here for reference purposes only, and this item is no longer available for ordering.

The Pololu IR beacons (infrared beacons) are small devices that allow pairs of autonomous robots to detect each other. You can use the beacons to build pairs of robots that interact or chase one another, or to make a robot that can identify and return to a home base. For example, you could build a “cat robot” and “mouse robot” that each have an IR beacon, where the cat chases the mouse and the mouse runs away from the cat.

The beacons are ideal for autonomous robot contests in which robots compete in pairs, such as MIT’s annual 6.270 autonomous robot design competition, where our beacons have been used for several years.

Note: The Pololu IR beacon is a kit; before using it, you need to assemble the beacon by soldering its components onto its circuit board. To use the kit in robotics projects, you need to connect it to your own robot controller. Please note that pricing is for one IR beacon.

The beacons work by transmitting and detecting infrared light, much like a television remote control. Each beacon has four IR emitters and four IR detectors. The beacons alternate between transmitting and receiving so that they never get confused by reflections of their own transmissions.

Please take a look at the user’s guide (557k pdf) for assembly instructions and further discussion of how the beacon works.