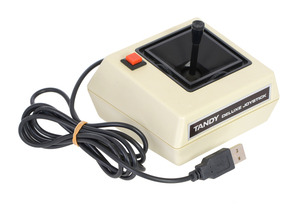 The Wixel is a versatile device that can be programmed to act as a standard HID device, appearing to a computer as a keyboard, a mouse, a joystick, or even a combination of multiple interfaces. We have written a Joystick App that does just that, and this tutorial shows how you can use a Wixel and the Joystick App to convert a non-USB joystick into a USB device. You will not need any knowledge of computer programming or USB for this project, although you will need soldering skills.

Even though the Wixel has wireless capabilities, we will be making a wired USB device in this tutorial.

Beyond the Wixel, you will need a suitable input device to convert. We used a Tandy Deluxe Joystick for this tutorial, but any device that uses pushbuttons, switches, and/or potentiometers for input will probably work.

The tools and supplies you require will probably depend on your particular situation, but might include:

Many of the tools are available in the Tools section of the Pololu web site.

To begin converting an input device with a Wixel, you first need to make the appropriate electrical connections and integrate the Wixel into the device physically. This section of the guide demonstrates the construction process with the Tandy joystick we converted.

Step 1: Disassemble the joystick and look at its wiring.

First, you need to open up your input device to allow access to the pins on its buttons and potentiometers.

In the case of this Tandy joystick, we could see that the wires from the components went directly into the joystick’s original cable, so we were able reuse those wires to connect the components to the Wixel.

In some other input devices, such as certain gamepads, the components might instead be connected to a microcontroller or other logic inside the device. To convert such a device, you might need to make new wire connections between the components and the Wixel, and you might need to cut existing connections to ensure the original circuits don’t interfere with the Wixel’s inputs.

Step 2: Determine how to wire the buttons and potentiometers to the Wixel.

The picture on the right shows the easiest way to do this: the button or switch should be connected between the selected pin and GND (0 V), and the internal pull-up resistor on the pin should be enabled. (Pull-up settings can be changed when the Joystick App is loaded onto the Wixel, as discussed later in in Section 4.) In this configuration, the input will be pulled high (3.3 V) when the switch is open, and it will fall to 0 V when the switch is closed.

The Joystick App allows you to change how each input maps to a joystick function (for example, you could designate P1_6 to represent Button 0 and P1_3 to represent Button 1), so you have a choice of which input pin to use for each button or switch. However, you should be aware of limitations when using certain pins:

Our Tandy joystick has two buttons, and we connected them to pins P1_2 and P1_3.

Potentiometers can be connected to any of the Wixel’s analog input pins on Port 0 (P0_0 through P0_5).

The potentiometer should have a resistance of at least 1 kilo-ohm so that it does not draw too much current from the 3V3 line. The Tandy joystick contains two 100k potentiometers, one for each axis; we connected them to P0_0 and P0_1.

Caution: The Wixel’s I/O lines are not 5 V tolerant, so you must not connect voltages over 3.3 V to these pins.

Step 3: Solder the button and potentiometer connections to the Wixel.

We prepared the existing wires in our joystick by cutting them and stripping their ends. As discussed in Step 1, we were able to simply connect the wires in this joystick directly to the Wixel, but a different device might require more modification. If you are unsure about the connections you need to make, it might be a good idea to try making temporary connections to the Wixel (e.g. with test leads) and skip to loading the Joystick App onto the Wixel to see if your converted device works as you expect.

For maximum compactness, we soldered the wires directly to the pins we have chosen on the Wixel.

Step 4: Connect a USB cable and mount the Wixel inside the joystick.

Since you might have to reload the app a few times to change the configuration settings, you will need access to the Wixel in order to put it into bootloader mode. This means it is a good idea to mount the Wixel in a way that still allows you to connect P2_2 to 3V3 and to leave the housing of the device open for now.

Once a USB cable is plugged into the Wixel and it is secured, the construction of the device will be complete, and you will be ready to load and configure the Joystick App on the Wixel. We used double-sided foam tape to attach the Wixel to a convenient spot inside the joystick’s housing.

Once your input device has been properly wired to the Wixel, you can proceed to load the Joystick App onto the Wixel and configure it to represent the device’s functions correctly.

Step 1: If necessary, install drivers and software for the Wixel.

See Section 3 of the Wixel user’s guide for instructions to install the Wixel Configuration Utility and any necessary drivers on your computer.

The Joystick App can be downloaded from Section 9.g of the Wixel User’s Guide, and you can read detailed information about the app there.

Step 3: Open the Joystick App in the Wixel Configuration Utility.

Do not write the app to the Wixel yet. (Section 4 of the Wixel user’s guide explains how to use the Wixel Configuration Utility.)

If you wired your device the same way we did in Section 3, you might not need to change any parameters from their default values at all. In case you do need to change some, though, here is a list of the parameters and what they do:

The app documentation also describes the parameters in detail.

Step 5: Connect the Wixel to your computer and write the app to it.

Once you have successfully written the Joystick App to the Wixel, it should show up to your computer as a Human Interface Device. In addition to appearing as a joystick, the Wixel will also show up as a keyboard and a mouse, but the Joystick App does not use those interfaces.

To test the joystick functions on Windows, you can use the Game Controllers applet in the Control Panel, where you should see a “Wixel Joystick” entry. Selecting this entry and clicking the Properties button will display a dialog that shows the state of the joystick’s axes and buttons. On Linux, you can try using the programs jstest or jstest-gtk.

If your input device is being read by your computer and behaving correctly, congratulations! You can now finish reassembling it and start using it.

Changing parameters and reloading the app

If your device is not behaving the way you expect, you probably need to adjust the app parameters. To do this, you need to manually put the Wixel into bootloader mode, since the Wixel Configuration Utility does not detect Wixels with USB HID interfaces.

Here are some ideas for additional things to try with the Wixel and Joystick App:

With the Wixel’s ability to act as a Human Interface Device, it can be used as a USB interface between a computer and a physical input device. The Joystick App makes it easy to configure the Wixel for use in such an application.

Did you build a USB input device with the Wixel and its Joystick App? Please join us on our robotics forum to ask questions, give feedback, or share your projects. We would love to hear about your experiences, and we would be delighted to see any improvements or alterations you make!