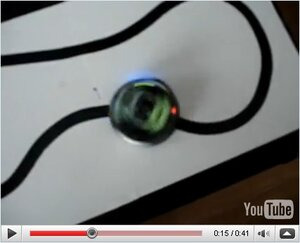 Pololu Introduction to the 3pi Robot

3pi Demo from the Maker Shed

The following unedited video shows six 3pi prototypes running simultaneously on the same line-race course. Each robot was programmed independently, but as you can see, the results were remarkably consistent. The last one on the line wins!

IceFlinger shows off his fast 3pi line follower. It is running the sample PID line-following code provided by Pololu with improved PID constants so that it can hold the line while going around sharp turns at high speed. He won the event he entered at the 2009 Eastern Canada Robot Games competition.

MonkeyFCoconut writes: “My desk at work makes for a nice canvas to put down some black tape and make a line following robot track. I’ve wanted to do this for years, and just finally broke down and bought an awexome robot to play with. This robot is powered ‘logically’ by the ATMega328p processor, which is nice if you are familiar with Arduino projects.”

Speeding Up on Straightaways (by leenstl)

Jason has programmed his 3pi to follow a laser pointer rather than a line. He started a forum thread about his project and provides his source code for those who want to try it for themselves. The only additional hardware required is a laser pointer.

Waiter Robot can make a “Robot Bar” for your next exhibition, show, private event, or sales promotion. They use the 3pi to deliver food and drinks in an remarkable way. March 2011.

This is a demonstration of a 3pi maze-solving robot that was programmed by a Pololu engineer to compete in LVBots Challenge 4.0. The code running on this 3pi prototype—it has only one blue power LED on the bottom—is more advanced (and complicated) than the sample maze-solving code we provide. Improvements over the sample program include a higher base running speed with better-tuned line-following PID constants, faster and smoother turns, and increased speed on long straight segments.

Lufamseed programmed his 3pi with a flood-fill algorithm that allows it find the shortest path through a looped maze. A looped maze is one that has internal cycles that can thwart a standard left- or right-hand-on-the-wall strategy by causing the robot to loop endlessly around the cycle or to miss entire sections of the maze. Flood-filling requires the robot to treat the maze as a grid of possible intersections; it populates this grid as it traverses the maze and at every step it floods the maze starting from a particular, known cell. Flooding the maze assigns values to every reachable cell based on how long it would take to reach that cell through known paths, which lets the robot deduce the shortest path from its current location to the cell the flood originated from. This algorithm can require a lot of memory, so storing data compactly is a must when implementing it on the 3pi.

Karandex’s 3pi maze-solver won this competition (in Maharashtra, India) with a time of 6 seconds. This video shows both the winning 3pi and the second-place finisher, which took 16 seconds to solve the same maze. This is a stock 3pi running optimized code.

Maze Solver From Any Location

Moat’s 3pi line tracking robot solves the maze from any starting point. First, the robot learns the entire maze. Then, the robot may be placed anywhere. Once it figures out where it is, it goes straight to the end. The code is available here.

This project used m3pi robots with Wixels attached for wireless communication. It used a Java program which calculates optimum routes for each robot and schedules them. The scheduling process is based on the A*-algorithm. To avoid deadlocks and﻿ collisions it uses automata, theory and a Java API called Supremica developed at Chalmers University of Technology in Gothenburg Sweden.

Line Following With Gaps and Obstacles

This 3pi robot, customized and programmed by Jan Matas, can follow a black line with sharp corners, gaps, and obstacles. The text translates to: “We have seen many robots that try to follow a black line. And how have they performed? Sadly… But today, the revolution is here. Hello my name is Pololu 3pi. I am the robot preparing for Robocup jr. 2010 in category rescue.”

3pi as a Wall-Following Robot

This video shows a 3pi robot that uses two Sharp distance sensors to follow walls on its left and drive around obstacles in its way. Please see our sample project for information on how to make your own 3pi wall follower.

This competition pits multiple robots against each other on the same course. The goal is to be the fastest to complete three laps around the obstacles.

This video shows a 3pi robot being controlled via signals from a two-channel RC receiver. Please see our sample project for more information on how to make your own RC 3pi.

This video shows a school project by Group 9 at University West (Trollhättan, SWEDEN) in fall 2009. The 3pis use Sharp distance sensors to simultaneously run on the same line and maze courses without colliding.

This video shows the final version of a school project to turn a 3pi robot into a wall follower using two side-looking long-range sharp distance sensors and a front-looking sonar sensor. For more information, please see Mathew’s 3pi blog, which tracks the progress of the project and provides source code and pictures.

Kazuhiro Ouchi mounts an ARM mbed development board on a 3pi expansion board and uses it to receive commands from a Bluetooth keyboard and send serial commands to a serial-slave 3pi. He wrote an mbed notebook page (in Japanese).

Terry, also known as lufamseed, made this Micromouse 3pi robot by that uses distance sensors and encoders along with a flood-fill algorithm to find the shortest path through a walled maze.

Louie used three electret microphones and two 74HC4052 multiplexers to turn his 3pi into a sound follower. To find out more about his project, see Louie’s forum thread.

MrDreamBot made this remote-controlled 3pi that uses Wixels and custom PC software written in Java.

Human Use of Human Beings

An art display of many line-following, networked Pololu 3pi Robots.

Project Tabletop is a series of interesting, customer-created open source projects for the 3pi robot, including barcode reading, grid navigation, and obstacle avoidance.