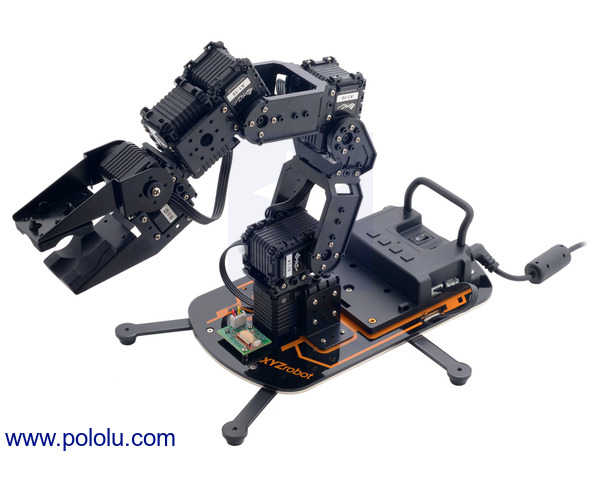 Build your own advanced robotic arm with this 6 DOF Robotic Arm Kit from XYZrobot. It features six A1-16 smart servos that are capable of sophisticated kinematics positioning control while lifting payloads up to 700 g (1.5 lb). Free motion editing software is available for configuring the arm to move in response buttons on the base, a smartphone or tablet running the XYZrobot app, or a Bluetooth controller (not included). The arm also features an Arduino-compatible microcontroller, so you can integrate your own sensors and program it to have new and interactive or autonomous behaviors.

Build your own advanced robot arm with the 6 DOF Robotic Arm Kit from XYZrobot (the arm itself has five degrees of freedom, and there is a sixth servo for operating the gripper)! It features six smart servos, each with 330° of effective position control, that allow it to perform a wide range of complex movements while lifting payloads up to 700 g (1.5 lb). Assembly is quick and requires no soldering.

The arm movements can be configured with the free XYZrobot motion editor software, and they can be triggered using the four buttons in the base of the arm, by a smartphone or tablet running the XYZrobot app, or by a bluetooth controller like the one included with the Bolide Y-01 humanoid robot.

The arm also features an Arduino-compatible ATmega1280 microcontroller, so you can integrate your own sensors and program it to have new and interactive or autonomous behaviors.

What really makes this arm special compared to other arms based on standard hobby servos is its six A1-16 smart servos, which can produce up to 25 kg-cm of torque at 12 V. These highly configurable servos can be daisy-chained on a single bus and transmit temperature, speed, and position data back to the controller. Each servo include a four-color LED for displaying the servo’s status.