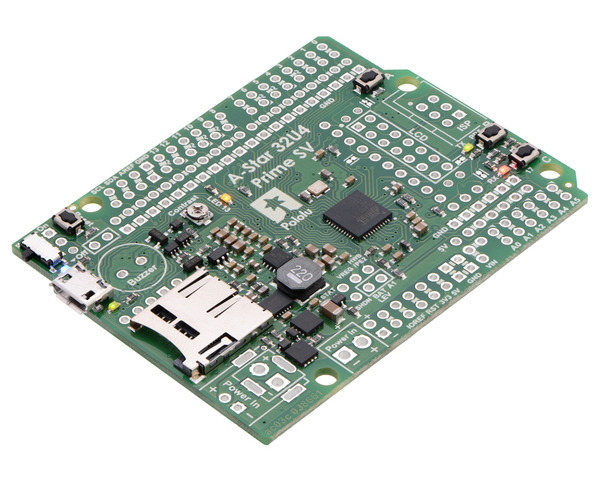 This is a merged information page for Item #3112.
View normal product page.

The A-Star 32U4 Prime SV is a programmable board based on the ATmega32U4 AVR microcontroller and arranged in the common Arduino form factor. The A-Star Prime offers many additional features and improvements over competing products, including superior power management that enables efficient operation from 5 V to 36 V. This configuration of the A-Star 32U4 Prime SV includes microSD support and does not include any through-hole components; it is intended for those who want to customize the way it is assembled.

This configuration of the A-Star 32U4 Prime SV includes microSD support and does not include any through-hole components. It ships as shown in the picture above, without any headers, a buzzer, or DC power jack. This configuration is intended for those who want to customize the way the board is assembled. We carry an A-Star Prime Accessory Pack that consists of a variety of through-hole components that can be installed on this board, including the parts necessary to make it just like our more assembled configurations (male and female 2×7 LCD headers are part of the accessory pack, but the LCD is sold separately). This is the SV version of the A-Star Prime, which operates from 5 V to 36 V.

1
Note that 4 KB of the MCU's 32 KB of flash memory is used by the pre-installed USB bootloader. All 32 KB is available when programming via the ISP header rather than the bootloader.
2
For light loads. The regulator's dropout voltage increases approximately linearly with the load, from a few millivolts at no load up to around 0.9 V at 1 A.
3
Available current depends on input voltage, current consumed by the board, ambient conditions, and regulator topology. See product documentation and performance graphs for details.