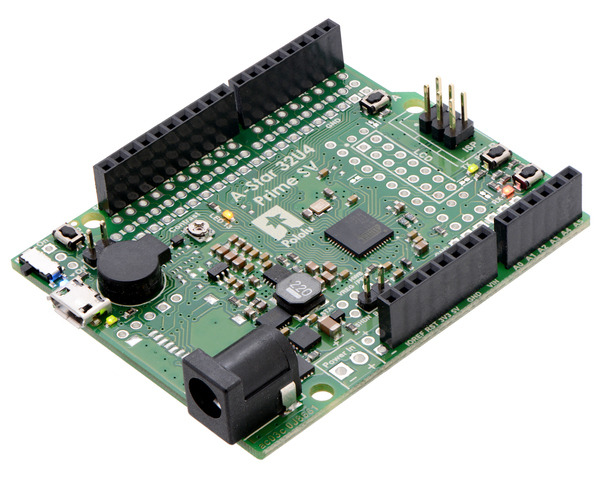 This is a merged information page for Item #3113.
View normal product page.

The A-Star 32U4 Prime SV is a programmable board based on the ATmega32U4 AVR microcontroller and arranged in the common Arduino form factor. The A-Star Prime offers many additional features and improvements over competing products, including superior power management that enables efficient operation from 5 V to 36 V. This configuration of the A-Star 32U4 Prime SV has no microSD support and includes preinstalled female headers common to many Arduinos.

This configuration of the A-Star 32U4 Prime SV does not offer microSD support and is assembled with through-hole components as shown in the picture above so that all the basic features can be used without any additional soldering. The standard female headers common to many Arduinos are preinstalled, as is the 2×3 male ISP header, buzzer, DC power jack, and shorting block headers for enabling the buzzer and battery voltage monitor. This is the SV version of the A-Star Prime, which operates from 5 V to 36 V.

1
Note that 4 KB of the MCU's 32 KB of flash memory is used by the pre-installed USB bootloader. All 32 KB is available when programming via the ISP header rather than the bootloader.
2
For light loads. The regulator's dropout voltage increases approximately linearly with the load, from a few millivolts at no load up to around 0.9 V at 1 A.
3
Available current depends on input voltage, current consumed by the board, ambient conditions, and regulator topology. See product documentation and performance graphs for details.