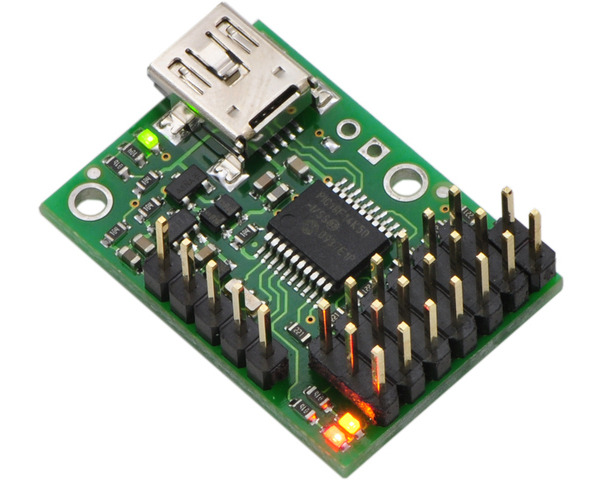 This is a merged information page for Item #1350.
View normal product page.

The six-channel Micro Maestro raises the performance bar for serial servo controllers with features such as a native USB interface and internal scripting control. Whether you want high-performance servo control (0.25 μs resolution with built-in speed and acceleration control) or a general I/O controller (e.g. to interface with a sensor or ESC via your USB port), this tiny, versatile device will deliver. The fully assembled version ships with header pins installed.

Compare all products in Maestro USB Servo Controllers or

Getting started with the Maestro Servo Controller

The Micro Maestro is the smallest of Pololu’s second-generation USB servo controllers. The Maestros are available in four sizes and can be purchased fully assembled or as partial kits:

The Mini Maestros offer higher channel counts and some additional features (see the Maestro comparison table below for details).

The Micro Maestro is a highly versatile servo controller and general-purpose I/O board in a highly compact (0.85"×1.20") package. It supports three control methods: USB for direct connection to a computer, TTL serial for use with embedded systems, and internal scripting for self-contained, host controller-free applications. The channels can be configured as servo outputs for use with radio control (RC) servos or electronic speed controls (ESCs), as digital outputs, or as analog inputs. The extremely precise, high-resolution servo pulses have a jitter of less than 200 ns, making these servo controllers well suited for high-performance applications such as robotics and animatronics, and built-in speed and acceleration control for each channel make it easy to achieve smooth, seamless movements without requiring the control source to constantly compute and stream intermediate position updates to the Micro Maestro. Units can be daisy-chained with additional Pololu servo and motor controllers on a single serial line.

A free configuration and control program is available for Windows and Linux, making it simple to configure and test the device over USB, create sequences of servo movements for animatronics or walking robots, and write, step through, and run scripts stored in the servo controller. The Micro Maestro’s 1 KB of internal script memory allows storage of servo positions that can be automatically played back without any computer or external microcontroller connected.

Because the Micro Maestro’s channels can also be used as general-purpose digital outputs and analog inputs, they provide an easy way to read sensors and control peripherals directly from a PC over USB, and these channels can be used with the scripting system to enable creation of self-contained animatronic displays that respond to external stimuli and trigger additional events beyond just moving servos.

The Micro Maestro is available fully assembled with 0.1″ male header pins installed as shown in the product picture or as a partial kit, which ship with these header pins included but unsoldered, allowing the use of different gender connectors or wires to be soldered directly to the pads for lighter, more compact installations. The Mini Maestro 12, 18, and 24 are also available fully assembled or as partial kits. A USB A to mini-B cable (not included) is required to connect this device to a computer. The Micro and Mini Maestros have 0.086″ diameter mounting holes that work with #2 and M2 screws.

The Micro and Mini Maestros are available with through-hole connectors preinstalled or as partial kits, with the through-hole connectors included but not soldered in. The preassembled versions are appropriate for those who want to be able to use the product without having to solder anything or who are happy with the default connector configuration, while the partial kit versions enable the installation of custom connectors, such as right-angle headers that allow servos to be plugged in from the side rather than the top, or colored header pins that make it easier to tell which way to plug in the servo cables. The following picture shows an example of a partial-kit version of the 24-channel Mini Maestro assembled with colored male header pins:

How should I attach a button or switch to my Micro Maestro?

First, decide which channel you would like to connect your button or switch to. In the Maestro Control Center, under the Channel Settings tab, change that channel to Input mode and click “Apply Settings”. Next, wire a pull-up resistor (1–100 kilo-ohms) between the signal line of that channel and 5 V so that the input is high (5 V) when the switch is open. Wire the button or switch between the signal line and GND (0 V) so that when the button/switch is active the input will fall to 0 V. The picture to the right shows how to connect a button or switch to channel 0.

What are the wires coming out of my servo?

Most standard radio control (RC) servos have three wires, each a different color. Usually, they are either black, red, and white, or they are brown, red, and orange/yellow:

Please check the specs for your servo to determine the proper power supply voltage, and please take care to plug the servo into your device in the proper orientation (plugging it in backwards could break the servo or your device).

Note: Some of the servos we carry also have an optional fourth green wire that is separate from the three standard ones. This wire provides access to the feedback potentiometer, allowing you to directly measure the position of the output. The servos with this extra wire have "with Position Feedback" at the ends of their product names. The picture below is an example of such a servo.

Is it possible to use digital servos with the Maestro servo controllers?
Yes, any servo designed for standard RC receivers should work with the Maestro (and any of our other servo controllers), whether it is a digital or analog servo.
Can I power my servos with the USB port?
No. A USB port might only be capable of supplying 100 mA, which is less than what you need for a single servo. Many USB ports can deliver 500 mA, but this is still not enough for typical servos requiring 1 A or more.
How do I use my Maestro servo controller to get the maximum possible range of motion from my servo?

Be careful when going past the normal 90-degree range to avoid damaging your servo.

To find the settings in the Maestro Control Center that make your servo rotate as much as it can, first set the Min and Max values on the Channel Settings tab to a wider range. Then use the lowest possible supply voltage at which your servo moves and gradually move the slider on the status tab until the servo does not move any further or you hear the servo straining. Once you reach the limit, immediately move back from it to avoid damaging the servo. Finally, return to the channel settings tab and configure Min and Max so that the servo will never go past the limit.

Why do servo speed and acceleration limits not work for the first movement after startup or after setting the target to zero?

If you need your servo’s first movement to be controlled by the speed and acceleration limits, then the first Set Target command you send to the Maestro should correspond to the servo’s current position. For example, if you know that your servo will always be at a position of 1500 μs when your system starts up, then your first Set Target command for that servo should have a value of 1500 μs.

Similarly, if you set the target of a servo to zero to make the Maestro stop sending pulses, the Maestro will lose its knowledge of where the servo is. During this time, the servo might slip and go to a different position. If you know your servo is not going to slip, then your program or internal script could remember where the servo is and send a Set Target command with that position in it before trying to move the servo to another position.