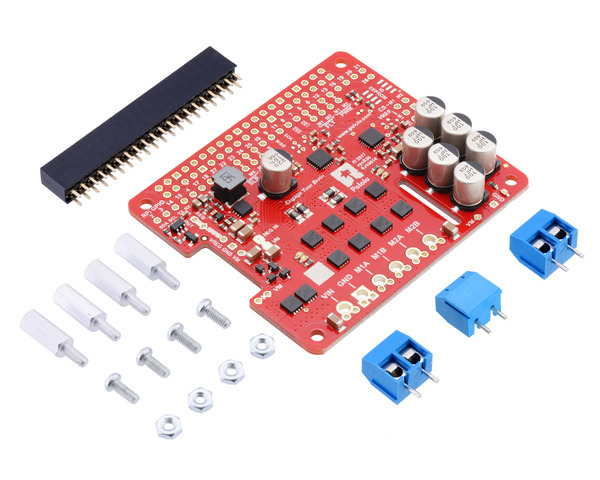 This is a merged information page for Item #3752.
View normal product page.

This add-on board makes it easy to control two high-power DC motors with a Raspberry Pi. Its twin discrete MOSFET H-bridges support a wide 6.5 V to 36 V operating range and are efficient enough to deliver a continuous 14 A without a heat sink. The drivers offer basic current limiting functionality, and they accept ultrasonic PWM frequencies for quieter operation. The default pin mappings make it easy to get started, but they can be customized for more specialized applications. This version ships as a partial kit; all surface-mount components are installed, but the included through-hole connectors are not soldered in.

This version of the 24v14 motor driver is a partial kit, with connectors included but not soldered in. It can be distinguished from the other versions by its red PCB and the number 100 on top of the six tall silver electrolytic capacitors at the corner of the board. (See item #3753 for an assembled version.)

1
Without included connectors and mounting hardware.
2
Absolute maximum; higher voltages can permanently destroy the motor driver. Recommended maximum is approximately 30 V, which leaves a safety margin for ripple voltage on the supply line. Disconnecting on-board regulator increases absolute maximum to 40 V. Not recommended for use with 36 V batteries.
3
Typical results at room temperature with both channels running at 90% duty cycle.