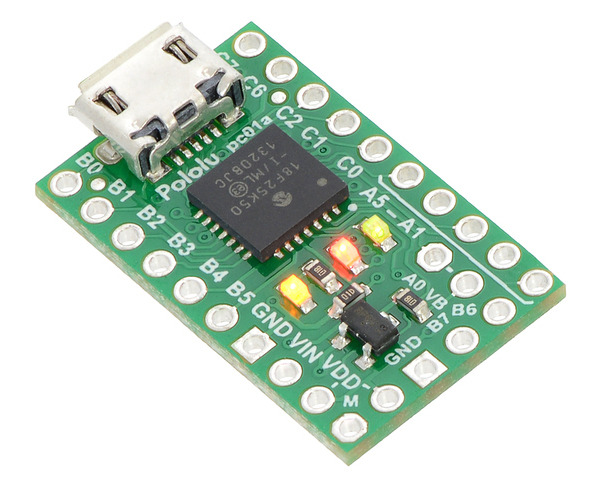 This is a merged information page for Item #3150.
View normal product page.

The P-Star 25K50 Micro is a tiny programmable module featuring Microchip’s PIC18F25K50 microcontroller. It packs a Micro-USB interface and 19 digital input/output pins onto a board measuring only 1″ × 0.6″ and ships preloaded with a USB bootloader, so no external programmer is required.

The Pololu P-Star 25K50 Micro is a general-purpose programmable module based on Microchip’s PIC18F25K50 microcontroller, which has 32 KB of flash program memory, 2 KB of RAM, and built-in USB functionality. On-board features of the P-Star (abbreviated P*) include a 16 MHz crystal, a USB Micro-B connector, and three user-controllable indicator LEDs. A voltage regulator and power selection circuit allow the board to be powered from either USB or an external 5.5 V to 15 V source, while a resettable PTC fuse on the USB VBUS supply and reverse protection on VIN help protect it from accidental damage. The board ships with a USB bootloader that makes it easy to program the PIC microcontroller without using an external programmer.

Our comprehensive user’s guide provides the basics you need to get started with the P-Star 25K50 Micro as well as detailed technical information.

This diagram identifies the I/O and power pins on the P-Star 25K50 Micro. The diagram is also available as a printable PDF (161k pdf). For more information about the PIC18F25K50 microcontroller and its peripherals, see Microchip’s PIC18F25K50 documentation.

1
Without included optional headers. This measurement includes the USB Micro-B connector, which extends 0.05″ past the edge of the PCB.
2
Without included optional headers.
3
8 KB of the MCU's 32 KB of flash memory is used by the pre-installed USB bootloader. All 32 KB is available if you use an external programmer and erase the bootloader.
4
All 19 can be used as digital I/O, 14 can be used as analog inputs, and one can be an analog output. 16 of the 19 are available along the sides for use in a breadboard.
5
On VIN.